Words that Mean Something

Before I became a naturalized American, after twenty hard-working years in this country, I was not very enthusiastic about it. I felt that I was losing something of me, something of my Venezuelan being, by becoming a citizen of this country. However, I did it mostly because I didn’t want to risk living here with a permanent resident “alien” card, presumably renewable every ten years, and to make my family and myself “alien” citizens forever. So we went through the process of naturalization that required to fill a long questionnaire, an interview to demonstrate certain knowledge of the US constitution and history, and to show your ability to speak English. After we passed the interview, the immigration authorities set a day for the naturalization ceremony. For my delight, being a baseball fan, the ceremony happened in the Detroit Tigers’ baseball field because one of the Tigers players was also becoming American. It was a Summer day, and we were standing between the third base and home plate, along with a group of about 100 people from multiple nationalities. The judge who lead the ceremony was short and to the point, and in less than 20 minutes we were done and heading to the seats to watch the baseball game as part of the “package” of the entire ceremony.

Along with the naturalization certificate, which looks like a high school diploma with your picture in it, and with the name you choose to use in America (any name you wish), you also receive a short letter signed by the President of the United States of America (yes, I write it in capital initials to make it sound important). I now show the main paragraph of that letter. These words mean something:

“Americans are united across the generations by grand and enduring ideals. The grandest of these ideals is an unfolding promise that everyone belongs, that everyone deserves a chance, and that no insignificant person was ever born. Our country has never been united by blood or birth or soil. We are bound by principles that move us beyond our backgrounds, lift us above our interests, and teach us what it means to be citizens. Every citizen must uphold these principles. And every new citizen, by embracing these ideals makes our country more not less American.”

When I read this letter, signed by the US president of that time, I said to myself: these ideals are universal, not just American ideals. It meant that I have lived all my life being American, or better, being a universal citizen. Let us exam the letter in detail:

I read that letter several times in the following weeks after the Tigers’ game, and each time I read it, I felt more and more of a citizen, not just of America, but even more citizen of my dear Venezuela where I learned those ideals, and also a better citizen of this world were we all live.

That letter was written by a Republican president, George W. Bush, but that is irrelevant. I am convinced that any Democrat president would have written something similar. However, the fact that was written by a Republican president is at odds with the current position of the Republican party against the Obama’s executive actions. They are missing the point. As more and more foreigners come to America, the more American this country is. Republicans need to commit to the spirit of the letter I received, where it says “we are bound by principles that lift us above our interests” rather than thinking in the next election cycle, otherwise, a democrat president, likely a woman, will receive the majority of the votes from those naturalized Americans.

I bought a mechanical watch a couple of weeks ago. Not only it is mechanical, but also transparent, such that I can see the gears, the winding spring, and many other parts including the pendulum going back and forth every fraction of a second. One thing I noticed in this mechanical marvel is the absence of any damping. I mean the kind of damping that happens in shock absorbers in cars. If you are not familiar with damping, you just need to know this: it happens when two sides are approaching or separating each other.

We just had elections in the US, and the analogy between my new watch and the election results was clear to me. Elections results reflect where the society is going, swinging like a pendulum from one side to the other with a given frequency, in every single issue. However, there is a difference between the watch pendulum and the society’s pendulum: the magnitude of the movement for each social issue keeps diminishing as time passes. In physics terms, it has damping. It converges, eventually, to what the vast majority of society accepts (there will always be outliers who disagree in any issue).

For instance, the women’s right to vote was controversial for more than 130 years after the US constitution was written. During those years, and years after the constitutional amendment in 1920, the swings of the pendulum against and forth was smaller and smaller until today when there is no swinging any more. This right is “so obvious” that we can’t imagine why it was not in the constitution when the founding (all male) fathers wrote it. If we ask to a republican or a democrat whether women’s should have the right to vote, they would laugh for being such a ridiculous question. As a side note, it was in 1984 (just 30 years ago) that the state of Mississippi ratified this amendment. What world were they living in between 1920 and 1984?

Now we can do the analogy in issues of present times: abortion, LGBT marriages, universal health care, immigration reform, foreign policy in the Middle East, right to bear arms, euthanasia, minimum salary, drug legalization, and so on. Each one of these are issues that still oscillate from one side to the other and we may need to wait years or decades to see them disappear as oscillatory issues like the women’s right to vote did. In the mean time, we have to accept to be in the side of the winners some times, and in the side of the losers some other times (unless your convictions oscillate as well).

In any case, we have to wait many years to see a proof that all such issues have disappeared. For that to happen, this is an scenario: an elected US president that is non-christian, non-straight, non-white, non-male human being with a vision to create a better society, and that can guide this country to a prosperous, peaceful era without Sandy Hook massacres or Trayvon Martin’s shootings, without 8-year boys crossing the Arizona dessert to meet their moms, without sending our sons and daughters to die fighting all over the world, with the right to die as we want, with a salary that is proper to live decently, with CEOs making a just salary compared to the average worker, with politicians that work for the people and not for corporations. I won’t see this, but I know it will come after many oscillations of the damped society’s pendulum. 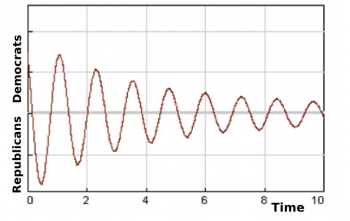